Edward (by everyone)
Filthy Oaf (by Horned Witch)

Edward is portrayed by Derek Mears and Robin Atkin Downes as Edward's voice.

Edward is seen giving food to the children in a deleted scene. Later, as Muriel and the Redhead Witch makes their attack on Augsburg to get the Horned Witch, Edward was with the Redhead Witch. Edward had taken the little girl they needed to complete the blood of the twelve moons ritual.

As Gretel is in the forest, looking for Hansel; she is attacked by Sheriff Berringer and the trackers. Edward killed them before taking Gretel to a spring to help heal her, then he leaves.

Gretel speaks to him while she is in cages in the witch's lair. Later, he saves Gretel from Muriel, he is then thrown off a cliff by her. Later, Edward is seen with Hansel, Gretel and Ben as they brings him along on their witch hunting adventures.

He had helped Gretel on more than one occasions. Although it is in his nature to serve witches, he had defied Muriel and other witches that he was with before to help Gretel.

Hansel did not meet Edward until the end of the movie . Gretel decided to bring him along on their witch hunts cause. Gretel thought he could be good use .

He is now friends with Ben as he is traveling with Hansel and Gretel.

Superhuman Strength: Due to his size, he is very strong. 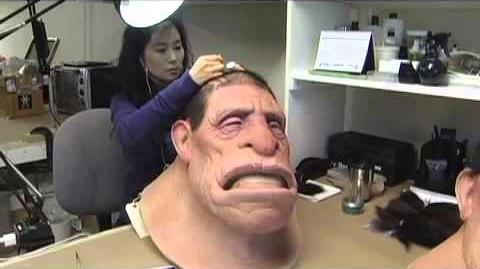 Edward looks at the deputy.

Edward with Ben, Hansel and Gretel.