Muriel is a grand witch as seen in the film.

She is portrayed by Famke Janssen.

Muriel confronts the trackers in the forest. She then kills them, except one who she casts a spell on. Later, Muriel is seen with the Redhead and Horned witch. They got a boy and made a potion out of him. Moments later, the Horned Witch drinks the potion and is seen being immune to fire for a brief moment. After the Horned witch is captured, she and Redhead witch distracts the town by burning a building. Redhead Witch and Edward got the last  girl they needed for the ritual whilst Muriel confronted Gretel and killed Jackson. Later, Muriel appears at Hansel & Gretel's home. She informs them of their mother before stabbing Hansel and abducting Gretel. At the Blood Moon Sabbath, she plans to kill the twelve children and Gretel so she and all the other evil witches could have the ability to be immune to sunlight but her plan fails as Mina and Hansel stop her. Later, by the old Gingerbread House, she killed Mina. After a short battle, Hansel and Gretel killed her.

Spell Casting: The ability to cast spells and perform rituals.

Flight: With the aid of her broom, she has the ability to fly.

Regression and Transformation: As a grand witch, she has the ability to change her appearance, from her actual form to a human form at anytime.

Pyrokinesis: She has the ability to manipulate and conjure fire.

Telekinesis: She has the ability to move objects with her mind.

Agrokinesis: She can manipulate plant-life.

Superhuman Strength: She is very strong.

Superhuman Speed: She is very fast.

Levitation: She can hover in the air.

It appears that they are close friends.

It appears that they are close friends. 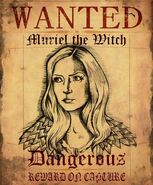 Muriel looks at the tracker.

Muriel with Redhead and Horned Witch.

As Redhead Witch uses her powers to locate Horned Witch.

Muriel with the invitation.

Muriel begs for her life.
Community content is available under CC-BY-SA unless otherwise noted.
Advertisement